Ensure efficiency and accountability in reconstruction

It has been exactly a year that a disastrous earthquake hit Nepal, followed by numerous aftershocks continuing till date, also triggering Himalayan avalanches and landslides at many places. The worst disaster of the century claimed 8,891 lives and injured another 22,302, damaging over 900 thousand residential and public buildings (including schools and hospitals) and 721 heritages all over Nepal.

Immediately after the earthquake, Association of Youth Organizations Nepal (AYON) in collaboration with various youth groups as Come On Youth Stand Up (CYSU) managed and coordinated one of the largest youth-led relief operation in Nepal via #act4quake youth campaign. Later on, during the recovery phase, AYON implemented its unique Youth Work Camp (YWC) model, whereby a group of 10 energetic youths would spend a week in disaster-affected community to help them in relief distribution, rebuild shelters, temporary learning centers and manage damaged structures. A total of 65 YWCs deployed 834+ youth volunteers to reach 350+ affected communities in 9 districts to benefit 8231+ students from 60+ schools.

As we all mark the first anniversary of the April earthquake 2015, AYON would like to express its deepest condolences to those who lost their family members and would like to empathize with thousands of survivors still living under temporary roofs.

To mark the day, AYON is neither organizing any conferences, seminars, workshops and/or other formal programs, nor attending any. AYON is, however, still carrying out its activities concerned with rebuilding and recovery:

We take this moment to thank thousands of youth volunteers, supporters, donors and above all the community members, who teamed with us to serve more than 16,000 families in over 400 villages in 9 earthquake-affected districts of Nepal.

In lieu with the spirit of Accountability School, AYON calls all the concerned stakeholders to be transparent in the use of post-disaster relief funds and prove their highest degree of accountability towards the need of those most affected. We urge all stakeholders to ensure the involvement of affected people in the planning, designing and implementation of rebuilding initiatives, without discrimination or bias on the basis of political affiliation, religion, caste, geography etc.  Rebuilding works should give special priority to address the needs of most vulnerable and marginalized households, including elderly, people with disability, single women, displaced, and families in the remote areas. Government and other actors should ensure that rebuilding not merely concern the physical structures, but also involves social and economic recovery including livelihood of the affected people.

AYON is concerned to observe that most of the affected families have not received enough support from government, and are forced to live in poor conditions under temporary roofs, even one year after the earthquake. Thus, we urge the government to carry out reconstruction activities with a sense of urgency. While we acknowledge the fact that procedures are important, but the lives of many still waiting for support cannot be put at stake. As monsoon arrives, the situation of many survivors will be more challenging, especially for those still under temporary shelters. We urge the government and other stakeholders to take proactive steps in advance before the situation get worse.

We are highly committed to support earthquake survivors and to do so through transparent and accountable ways; and we would like to urge all to do the same. 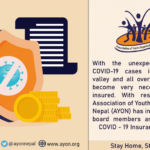