Association of Youth Organizations Nepal (AYON) in partnership with British Council (BC) Nepal had conducted a research on Updating the Status of Youth and hence disseminated the report on “Youth Survey Nepal” in 2nd June. The dissemination event was held in Hotel Radisson where the Minister of Youth and Sports, Mr. Hit Bahadur Tamang, was the Chief guest for the event.

Mr. Yogesh Gyawali, Program Officer of AYON, gave a brief presentation on the report. He said that the field-work for the youth survey was conducted on four districts: Rolpa, Kathmandu, Siraha and Bajhang in January 2011.

The objectives of this research is to assess the overall trend of entrepreneurship, self-employment and employment of Nepalese youth. It also attempts to decipher Youth’s role in conflicts, violence, building efforts. Furthermore, the research tries to figure out whether youth are agents of violence or torchbearers of peace. The research had used survey questionnaires, focused group discussions, case-studies, expert interviews and input workshop as data collection tools.

The facilitators of the Active Citizens program from Bhaktapur, Morang, Dang and Dhading were also awarded with certificates in the same event. The Acitve Citizens (AC) program is an experiential learing program that provides youth the skills, motivation to know themselves, engage in dialogue with others and carry out insightful Social Action Projects (SAPs) in their community. This program is initiated by British Council in Nepal with AYON as its partner organization. 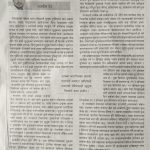 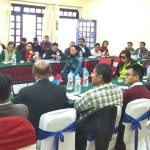 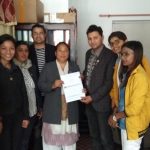